On November 3, we'll elect a president, 35 U.S. senators, 435 members of the House of Representatives, and many other important leaders. Each of these elected offices plays an important role in how our cities, counties, states, and entire country function. In turn, each of us has a role to play in choosing who will hold those offices after November 3. Make the most of your right to vote by getting to know the candidates up for election on your ballot. 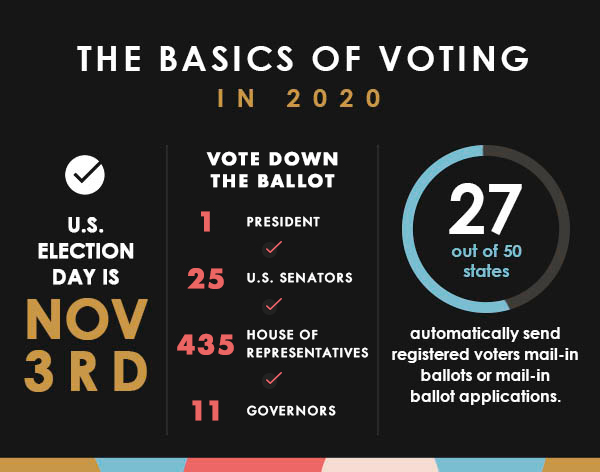 • Early voting is already underway in some states.

• A president, 35 U.S. senators, 435 members of the House of Representatives, 11 governors

What’s on the Ballot:

Ballots will vary by county and state. If you have questions about your ballot, there are many different resources where you can find more information, including HeadCount.org.

But here’s what you might expect to see on your ballot:

The Commander in Chief of our armed services, and the person responsible for implementing laws written by Congress. This position also holds responsibility for representing the entire country.

The U.S. Senate is made up of 100 senators, two for each state. Each senator serves a six-year term. Along with the U.S. House of Representatives, the Senate approves the federal government’s annual budget.

Members of the U.S. House of Representatives represent a portion of their state known as a congressional district. This averages around 700,000 people.

District attorneys (DA) have the power to choose which charges are filed against an individual accused of a crime. When the police arrest someone, the DA has the power to prosecute those cases or not. For example, they may choose to divert the accused to a drug treatment program or dismiss the case altogether.

Tax commissioners are responsible for collecting property taxes and keeping track of billing and accounting for your state. This means real estate, ad valorem taxes, etc.

In 26 states, a statewide referendum process is available to citizens. A referendum allows citizens to vote directly on proposed laws. A referendum is only passed if it’s approved by a majority of voters.

These are a few of the items you might expect come Election Day. No ballot is the same. We urge you to make your voice known. Educate yourself. Be informed and get out and vote.