A Natural Way of Living

May 5, 2021
May 5, 2021
MBIB team member Jessica Ayers gets up close and personal about how her hair and motherhood are deeply intertwined.

Motherhood is one of the most naturally beautiful moments in life. It’s a gift that we want to openly share with others, and the only gift that keeps us humble and learning about ourselves along the way. But what do the natural hair journey and motherhood have in common? For Jessica Ayers, the two are more intertwined than you’d think.

Ahead, Jessica shares her natural hair journey, and talks about embracing her full self through motherhood, and how she is using affirmations to teach her son to love his hair—and himself—no matter what anyone says. 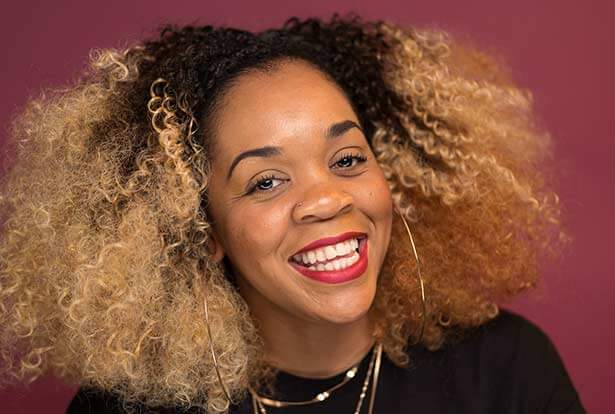 MBIB: Jessica, nice to meet you. Can you tell us a little bit about yourself?

MBIB: Thanks for being here with us. Let's dive in—can you tell us what inspired the natural transition?

JA: What triggered going natural was that I lost my job in 2013. I was in a really transitional period overall. I was really stripping down my life. I wanted to get back to "me."

I wasn't always excited about going natural. Some people do the big chop—I didn't do that. I grew my hair out as much as I could, cutting little by little as I was growing it out. I felt like going natural was that route. As a way to cut expenses, I went natural, thinking that was the cheap route. (Little did I know!) It wasn't permanent, it was more like "I can't afford that right now." I kind of ended up owning it, and I haven't looked back since.

MBIB: Give us your experience with wearing protective styles vs. natural styles.

JA: I think there's this idea that when you're natural, it still needs to look pretty and be neat—to have these beautiful curls, a certain curl pattern, or a certain texture.

I was taking notes from other people I had seen go through the process. I had a high school friend who said her hair grew the most when it was in braids or protective styles. Over the last eight years, I've worn my hair out for a whole day maybe three or four times. Even then, I'm super self-conscious. When my hair is not right, I don't feel right! I think we're slowly getting away from that, but all those messages and ideas are floating around in my mind where I can't be, "This is me. I don't care what anybody else thinks."

MBIB: Explain the “lazy natural" definition. Is that how you or others define your hair journey?

JA: When I say I'm a lazy natural, I think of someone who doesn't buy all the products. There's not a lot of experimentation.

It's whatever gets me by, and to make sure my hair is not falling out of my head, or that I can (somewhat) put a comb through it. I follow a lot of stylists, but going and doing the thing? That's a whole other process in general. I initially went into this thinking that natural hair was the easier route than getting your hair done, or going to the beauty shop. There are so many nuances to it, and finding the products. There can be a lot of expense found in taking care of your hair and getting it to a natural state. I've trimmed my hair once in eight years.

For the first time in eight years, I made a consultation for the stylist to look at my hair and tell me, "Here's what you need to do." I don't even know what it looks like (under my wrap)! We'll be surprised. I'll take a picture! I'm that person.

MBIB: Can you give us a breakdown of how you explore different hairstyles when changing it up? How has your work environment supported this expression?

JA: For me, I want to feel different. I want to look different. I'm tired of looking or feeling this way, and my hair is an extension and expression of that.

I've had blue hair, I've had pink hair. I've done red, I've done big afro, blonde bob! I feel like I embody this different part of me every time I change. The last year has been really difficult because I haven't changed it. (That's part of why I'm excited about the hair appointment!) It's usually something inner that's triggering it, and I'm like, "I want to be different! I want to look different! I need to change something. I want to change."

MBIB has these weekly meetings where the crew comes together to talk about various things. One of the first meetings I had, people showed up with their hair wrapped and in a bonnet. I was like, "These are my people!" I felt like I could show up fully as myself and also own who I am and be uncomfortable, and have people who could help me along with that process. It's slowly breaking down the barrier for me that it's OK.

About Motherhood and Embracing Self 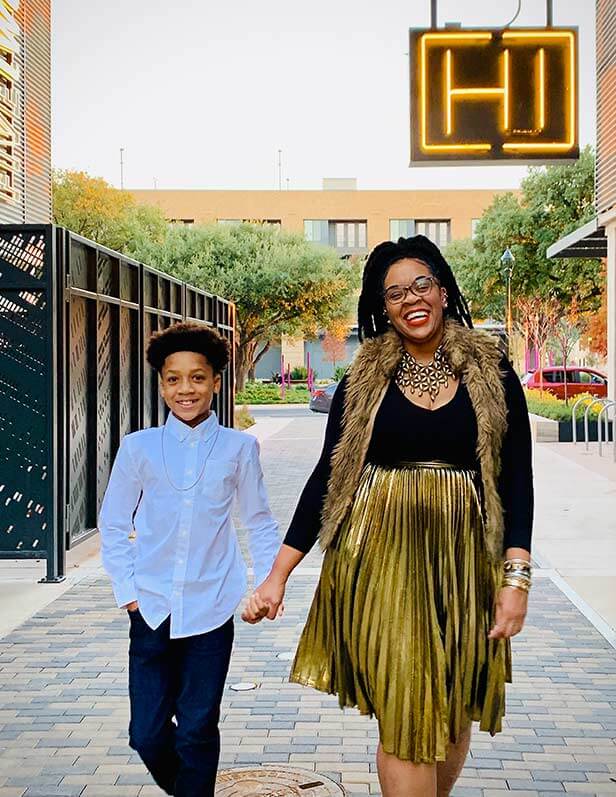 MBIB: As a mother, what's your favorite role you take on for your son?

JA: Of all the things, being the cheerleader is the best. I love supporting him in his dreams.

I think the pandemic has been the most pivotal thing for him in his life, and for me being alongside him. It's something no one has been through. It's something he's going to tell his kids about. Those moments where I get to be there for him, where I'm not having to be the disciplinarian or there's a lot of potential frustration. I like when we can just be—we're just hanging out.

MBIB: It sounds like you are a big advocate of self-love and expression. Can you give us an example?

JA: If there's one thing I can do in this life, it’s make sure my son gets to be the best version of himself.

He has a lot of mixed-race cousins, and their hair is long and curly, so he would compare. I want him to know that he's the most amazing, handsome boy and that he's perfect the way he is. For example, one day, I'm with my friend and my son was pulling on his hair. My friend said, "Why are you pulling on your hair? Your hair is beautiful. You have hair like Jesus! Your hair grows out, not down." I could see the spark in him, but I didn't know it stuck. We were in the car later on, and he's pulling at his hair again. He says, "I have hair like Jesus!" It's been like a badge of honor. Own who you are and accept those things and be proud of those things. You're perfect.

MBIB: Besides yourself, what other role models does your son turn to in embracing his natural hair?

JA: If there's someone Black doing something notable, I'm trying to make note of that to him. That being Black is so beautiful. We're just so dope.

MBIB: In your words, why is the natural hair journey about more than just hair?

JA: Going natural is like taking back your power, who you are. A reckoning that happens within yourself.

Going back to slavery, there's this idea that we had to assimilate. We couldn't be our full selves. It was a survival tactic. Generation to generation to generation, that has been ingrained in us. Going natural is like taking back your power, who you are. A reckoning that happens within yourself. It's you saying, "No, you don't get to tell me who I am and how I show up." It's a mind-set; it's a mentality. That's why I felt so hypocritical, because I'm still toeing the line. I can't tell my son that he has hair like Jesus, and then go and slap a wig on mine.

MBIB: It sounds like you've worked hard on developing a mentality with your son in mind. What would you say is the one aspect of motherhood you want to share with others?

JA: For mothers, but also everybody—you need to give yourself grace.

You can't always show up 100 in every space. Balance is a joke; there are ebbs and flows. And you have to be OK with the ebbs and flows. When you give yourself grace, you're able to get back quicker. Motherhood is the hardest job I've ever had in my entire life (mainly because it's more than one job), but it is also the most rewarding. There's just so much compacted into the experience of motherhood, but he saved me from myself. You don't know until you know. Becoming a mother changes everything. It's a rebirth.

About Raising a Child With Natural Hair

MBIB: According to our data, 60% of consumers buy more natural hair care products and practices than they did five years ago—and a significant percentage of consumers inherit their purchase behaviors from their parents. Have you found any of your own experiences being used to shape your son’s journey with hair care?

JA: By showing him how to take care of his hair, he's finding ways to incorporate that.

For about a year, my son wanted to wear mix-matched shoes and socks—intentionally. I'm like, "You own that!" So with his hair care, we spent a lot of care finding the right products for him, which is crazy because I don't do that for myself. I want to find things that work for him. For example, the Golden Milk Type 4 Conditioning Cream works so well on his hair. You can see his curls start to pop out and see the definition. At 10 years old, he has his own little routine.

MBIB: We heard your son is currently growing his hair out.

JA: My son loves looking at pictures of how much his hair has grown!

For his birthday this year, it grew so much that I gave him twists, which he loved because he said "Now my hair moves!" It kind of looks like Locs, so now he wants to get Locs, which I'm all for!

MBIB: When your son looks into the mirror and sees his hair, what do you want him to remember and recite back to himself?

JA: There's a lot of self-worth and value in his life.

I want him to know that: 1) You are amazing, and you are beautiful as a Black human being and 2) More importantly, you're kind, you're smart, you're those things.

MBIB: Lastly, if you could write a love letter to your son about motherhood, embracing natural hair, and self-love, what would it be titled?

JA: Show up for yourself.

It means that you gotta be proud of who you are. You gotta be OK with where you're at. At the end of the day, nothing else matters.

MBIB: Jessica, thank you so much for being here and taking up honest, vulnerable space. We appreciate you.